A “magnificent” cedar tree will live on as benches and tables in the school where it stood for 200 years.

Pupils and staff at Edge Grove, in Aldenham, mourned the loss of the historic tree which had stood proudly in the main drive of the school’s 48 acre grounds.

It collapsed in 2018, almost a year after heavy snow left the tree weak and vulnerable.

Determined to retain its significance as part of the school’s heritage, they hosted a tree planting ceremony and have used the remains of the tree to make a number of park benches and tables which have been dotted around the school’s grounds.

Year three pupils were joined by special guests including Ken Staton, a former gardener at Edge Grove of 50 years, Paul Howarth, president of the Edge Grove Society, and Pauline Daffon, administration assistant who has been involved with the school for more than 60 years.

In its place, a new cedar tree has been planted.

Ben Evans, headmaster at Edge Grove, said: “We are so very sad to have lost our magnificent cedar tree, it’s been part of our school surroundings forever.

“That said, we are thankful that nobody was injured during its sudden collapse late last year. As well as recycling parts of the tree into rustic outdoor furniture we’ve also planted a new cedar tree in its place and held a special tree planting ceremony to commemorate the event too.”

Edge Grove has previously received a gold award from the Woodland Trust and in autumn 2017, 250 trees were planted in its grounds. 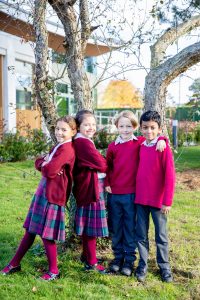